Mother Kenya is our Yashoda

- August 10, 2020
It is that time of the year again when we celebrate the birth of Shri Krishna. It is interesting to note that he had two mothers. We, the Hindus living in Kenya have two mothers also like Bhagwan Shri Krishna. How you ask?  Most of us were born in Bharat and then we migrated to Kenya through various channels like business, jobs, education, relationships and several others. If not ourselves, our grandparents (or their parents) were born in the great land of Bharat. In short we are rooted to Bharat in terms of ancestry. It is the land from which we derive our values, culture, inspiration and even culinary and linguistic inclinations.  That said, it is prudent to underline the fact that we have spent most (if not all) of our lives in Kenya. It is in this country that we are learning the various lessons of life. It is in this country that we are making a living and raising our families. It is this country which has given us a new meaning in life while still holding on to the priceless less
Post a comment
Read more

- June 29, 2020
When we think of archery, 2 great names come to mind from the epic Mahabharata. Arjuna and Karna. They were both valiant heroes with great skill in archery and they were on opposite sides during the great war of Kurukshetra. Arjuna was an obedient student of Dronacharya. He was able to learn a lot from his Guru, because of his  Samarpan  towards his teacher. This is the reason why he became the favourite student of Dronacharya. To learn something well, one must fully surrender to the teacher. He stayed in the righteous company of Shri Krishna and his brothers, the Pandavas. For this reason, he was able to easily walk the right path of Dharma. He had great character that he was loved by all. However, whenever anyone mocked his archery skills, he got furious. Karna on the other hand learnt his archery skills from Parshurama. He was actually Kunti’s son, but was raised by a charioteer. He despised it when people talked about his humble background because he always considered hims
Post a comment
Read more

Laxman : The Definition of Sangh

- June 12, 2020
• Chose the Path of Dharma himself: Raam and Sita decided to go into exile in the forest to fulfil the wish of Kaikeyi. Laxman thought about it and made a choice. He decided to leave the luxury of the palace to accompany Raam and Sita in the exile. He sacrificed the comfort of being near his family. He knew that it would be a life of hardship in the forest. He chose to be part of the mission of killing Raavan and re-establishing Dharma. A sangh karyakarta also does the same thing. He understands the scenario and weighs out the options, but still chooses to walk the difficult path of serving the society which is the work of God. He stays away from the comfort and luxuries of the world to do the difficult, but right thing. The work of Sangh is similar to that of Shri Raam – to re-establish peace and harmony in the world. • The Laxman Rekha: Raam went in pursuit of a golden deer for Sita. Laxman stayed back to protect Sita. But later, he had to follow Raam to assist him. When he lef
Post a comment
Read more

THE JOY OF SIMPLE THINGS 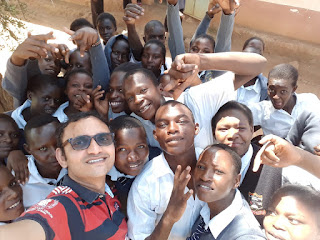 A few weeks back I joined the HRSC team on a trip to a school in Makindu. HRSC often has such projects to help the community across the year. For this particular one, we were going for the official opening of a borehole that had just been completed. A pit stop on our way was the sacred and well-known Makindu Sikh Gurudwara where we spent the night. After a heavy breakfast, we travelled to the school, which is a couple hours drive away.  Upon reaching the school, there was a welcome arranged for us by the students and teachers of the school. The students were unable to hide how happy they were to see us. It is not often that they get visitors from so far, and certainly not visitors who have improved their lives by building a borehole in their school. Their water problems were over and their smiles couldn’t hide how happy they were. After the ceremony was over, a few kids hung around me asking questions and trying to befriend me. Little did they know that they had already
2 comments
Read more

My Tolerant and Accommodating Mother Kenya

- September 22, 2019
Recently I was at an event where both the Kenyan and Indian national anthems were played to mark the commencement of the event. The Kenyananthem was played first and I couldn’t help to notice that only a handful was singing it, much too meekly and unsure of the words, out of the over-hundred in attendance. The rest stood awkwardly as they awaited the end of the anthem. Then, the ever so familiar music of the Indian national anthem started playing and everyone was more alert than before standing upright to sing the wonderful words of the Indian anthem. The hall was resonating with each and every word being sung by almost every person in attendance. This observation offered me two thoughts immediately and simultaneously. Firstly, I was feeling a great sense of pride and joy to learn that the Indian nationals (or once Indian nationals) were upholding the loyalty and fervor towards their Matrubhoomi (motherland). It is quite natural that one will quickly identify himself or herself wi
4 comments
Read more

- June 03, 2019
Equality. Yes, I am sure you must have heard about it everywhere, but how many of you have ever related to it in your everyday life situations. Although it’s not a trending topic, I thought we should all be aware of what we do unintentionally. I won't bore you...I’ll move on by telling you a story, from my collection to add into yours. Of course every one of you must have heard about Cars and Motorbikes but have you ever asked yourself why they are different when they help in performing the same tasks?  I’ll tell you: "There was a big Car that was proud of itself because it was large; it always mocked the Motorbike due to it being small compared to the car. The cleaner always washed the car with expensive soap, liquids and water while the motorbike was left dusty and grubby. The owner always drove to his office, parties and other various events on his car and used the motorbike when he is going to buy groceries. So again car said to motorbike “Who is the best of them
3 comments
Read more

- January 14, 2019
Whilst sitting in the SGR from Nairobi to Mombasa with a few learned friends, we got into a serious talk about the happenings of today and around 50 years ago. For example 50 years ago, my Father lived in the Old Town area of Mombasa. He says there were no locks on the doors. When going out they would just shut the door with a small stopper and ask the neighbour or some dukanwala or some handcart man to look after the house and in case some guests come they would be ushered into the house by the same neighbour or dukanwala or handcart man! Now we live in homes with 2 to 3 huge padlocks on the doors and some houses have electric fences too. And it’s everywhere, for example, my Uncle (God bless His Soul) who moved from India to England back in the early 70s used to say that milk was delivered in milk bottles. The Milkman would come at around 5am and you had to put your empty milk bottles with the monies in the carton, and the milkman would take the monies and replace the carto
4 comments
Read more
More posts

Samyek - Let our thoughts be in sync